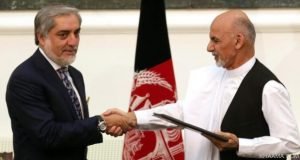 The names of at least 20 cabinet ministers who have been considered for the future cabinet of the Government of National Unity, have been revealed amid persistent delays by the government to introduce the nominees.

According to 1TV network, President Ghani and CEO Abdullah have met with almost 30 people and interviewed for the future cabinet.

However, it is yet not clear to which government positions the above individuals have been nominated.

This comes as the Government of National Unity was expected to announce the cabinet by today. However, the introduction did not take place due to unknown reasons.