Afghan army release 35 including women and children from Taliban cell 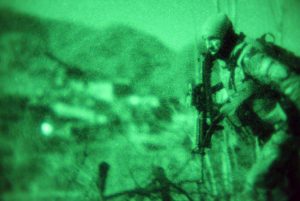 The Afghan National Army (ANA) forces released a group of thirty five civilians imprisoned by Taliban during a night raid in southern Helmand province of Afghanistan.

The Ministry of Defense (MoD) said the raid was conducted by the Special Operations Forces of the Afghan National Army (ANA) in Nad-e-Ali district.

A statement by MoD said the group of thirty civilians included five women, five men and twenty five children who were kept in a cell run by the Taliban militants.

The statement further added that seven Taliban militants were also arrested during the operation.

The Taliban militants group has not commented regarding the report so far which comes as the Taliban-led insurgency has been rampant in this province during the recent weeks.

The deteriorating security situation in Helmand forced the Afghan army to retreat from three bases last week with the Afghan defense officials saying the step was taken in a bid to help the resources for the improvement of security in other parts of the province.

The bases were located in the restive Musa Qala and Nawzad districts where around 400 security personnel were stationed.

Helmand has been witnessing constant fighting since the combat mission by the coalition security forces formally concluded by the end of 2014.