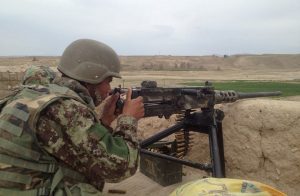 At least 41 Taliban insurgents were killed during an operation by the Afghan national security forces in western Herat province of Afghanistan, the defense officials said.

Led by the Afghan National Army (ANA) forces, the operation was conducted in Shindand district where at least 200 Taliban insurgents were killed during infighting last week.

The Ministry of Defense (MoD) said at least 50 Taliban insurgents were also wounded during the same operation.

The latest clashes between the Taliban factions follows almost three months after a similar clash broke out between the rival groups in this province.

The Taliban factions are occasionally engaging in deadly infighting, mainly due to differences over the group’s leadership, which changed following the death of the group’s founder Mullah Mohammad Omar.

The two Taliban factions involved in the deadly infighting were led by Mullah Samad and Mullah Nangialai.

The Taliban militants group has not commented regarding the infighting so far which comes as the group’s insurgency has been rampant across the country during.