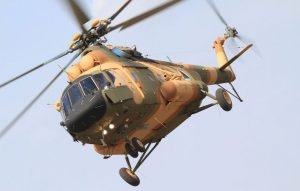 A helicopter of the Afghan National Army (ANA) forces made emergency landing in central Ghor province of Afghanistan.

According to the local government officials, the incident took place in Feroz Koh airport soon after the helicopter returned from a combat mission.

The officials further added that the helicopter made emergency landing due to technical issues and there were no casualties reported in the incident.

Provincial police chief Gen. Mustafa Mohseni said the helicopter had participated in a combat mission in the north of Feroz Koh district.

In the meantime, reports suggest that the helicopter caught fire after it made emergency landing.

Ghor is among the relatively volatile provinces in central Afghanistan where the Taliban insurgents and militants belonging to the other insurgent groups are actively operating.

Over 30 civilians were shot dead after they were caught by the militants in Ghor province late last month.

According to the local officials, the civilians were initially abducted and were executed by the loyalists of the Islamic State of Iraq and Syria (ISIS) terrorist group.