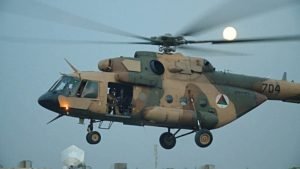 A helicopter of the Afghan armed forces has crashed in capital Kabul province leaving of the crew members wounded.

The incident has taken place in the vicinity of Surobi district earlier on Wednesday evening.

The Ministry of Defense confirmed the incident but added that the helicopter has made hard landing due to technical issues.

According to the Ministry of Defense, the helicopter made a hard landing in the South of Surobi Water Dam.

Surobi has been among the relatively calm district in East of Kabul province but the security situation of the district has deteriorated during the recent years.

This comes as the Afghan armed forces suffered casualties in an attack by the Taliban militants on a security post in Surobi district last month.

Security sources in Kabul confirmed that at least six soldiers lost their lives and at least four others were wounded in the attack.