Afghan army hands over check posts to Taliban in Helmand 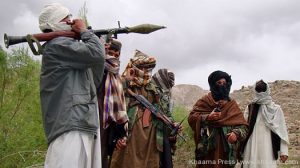 Unconfirmed reports from southern Helmand province of Afghanistan suggest that the Afghan national army soldiers have handed over a number of security check posts to Taliban militants.

A member of the provincial council for Helmand province who has requested not to be named, has said that the Afghan soldiers have handed over three security check posts in Sangin district.

The source further added that the security check posts were handed over following an agreement between the two sides.

However, local government officials in Helmand province rejected the reports and said an investigation will be launched in this regard.

Provincial governor spokesman, Omar Zwak said a delegation has been sent to Sangin district to probe the allegations.

This comes as earlier reports suggested that Taliban militants and Afghan secuity forces have reached to a cease fire agreement in Sarwan Qala area.