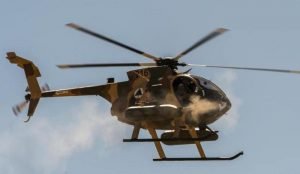 A combat helicopter of the Afghan forces made an emergency landing in northern Kunduz province of Afghanistan.

The Ministry of Defense (MoD) confirmed the incident took place on Thursday in Dasht-e-Archi district.

MoD spokesman Dawlat Waziri said an MD-530 helicopter made an emergency landing in Dasht-e-Archi district as it was on its way to Takhar for a mission.

Waziri further added that the helicopter was destroyed in the area as it was not repairable.

In the meantime, the Taliban militants group claim that the helicopter was shot down by the group’s fighters.

The group claimed that the Afghan security forces suffered casualties after the helicopter was shot in Takhar which eventually made emergency landing in Dasht-e-Archi district of Kunduz.

This comes as the Afghan forces are busy conducting counter-terrorism operations in northern Kunduz and Takhar provinces and in the latest operations at least 10 militants were killed and three others were wounded in the outskirts of Kunduz city and Imam Sahib district.