Afghan army and police officers kidnapped by Taliban in Herat 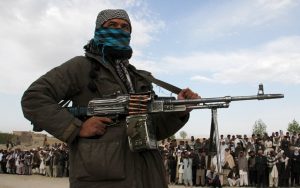 According to the local government officials, the two officers were kidnapped as they were travelling in a vehicle in Chesht district.

Provincial governor’s spokesman Jilani Farhad confirmed that the two officers were travelling in a private vehicle and were stopped by the Taliban insurgents as they were on their way to Herat city.

Herat is among the relatively peaceful provinces in western Afghanistan but the Taliban insurgents are active in some remote districts of the province.

The group often conducts insurgency activities by carrying out direct attacks, road side bombings, and establishing check posts to kidnap those working for the government.

This comes despite the provincial governor of Herat Mohammad Asif Rahimi’s earlier statement where he said the abduction cases have reduced by almost 40 percent in this province.

In the meantime, the Afghan forces are busy conducting their annual counter-terrorism operations which were launched in response to Taliban’s annual spring offensive.