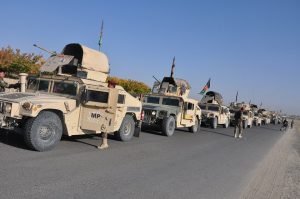 The Afghan National Defense and Security Forces (ANDSF) managed to retake the control of Tala Barfak district in northern Baghlan province of Afghanistan.

The Ministry of Defense (MoD) said the control of the district was taken during the operations of the armed forces and as a result the district has been fully cleared of the militants.

The source further added that the Afghan forces have also cleared the landmines and improvised explosive devices planted by the militants.

According to MoD, the situation of the district is normal now and additional armed and defense forces have been deployed in the district.

The ministry did not disclose further information regarding the casualties of the anti-government armed militants.

The district fell into the hands of the Taliban insurgents nearly ten days ago after the group launched a coordinated attack.

Baghlan is among the relatively volatile provinces in North of Afghanistan where the Taliban insurgents are active in some of its districts and often carry out insurgency activities.