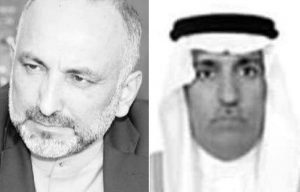 The Office of the National Security Council (ONSC) said the two sides also discussed the recently announced ceasefire with the Taliban group.

The source further added that the two sides discussed ways on the implementation of the decisions taken as part of the quadrilateral mechanism for cooperation in the areas of peace and stability.

According to ONSC, both Atmar and al-Ghofaili insisted on the importance of the quadrilateral mechanism established on national security advisers level for regional peace and stability as they emphasized for continued cooperation within the framework of the same mechanism.

Atmar also shared information regarding the recently announced ceasefire with the Taliban group and said the Afghan government’s resolute will and programs are key for regional peace and stability.

In his turn, Mr. al-Ghofaili called the ongoing war as illegitimate and hailed the Afghan government for its efforts and sacrifices, according to ONSC.

He also added that the Saudi Kingdom supports the announcement of ceasefire by the Afghan government with the Taliban group as he promised continued support to Afghan-led peace process.