Afghan Air Force to receive 12 warrior helicopters from US 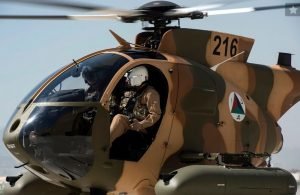 Amid efforts to bolster the capabilities of the Afghan Air Force (AAF), the MD Helicopters announced Monday that 12 additional MD-530F helicopters will be manufactured and delivered to the Afghan armed forces.

“This award, contracted through the Department of the Army Non-Standard Rotary Wing, reflects and reinforces the confidence of the U.S. Army in MD Helicopters’ ability to deliver reliable, mission-ready aircraft to support the United States Military and our partner nation Allies,” according to a statement by MD Helicopters.

MD Helicopters delivered the first twelve MD 530F Cayuse Warrior helicopters to the Afghan Air Force in support of the 2015 fighting season. These twelve aircraft were operational in theater in fewer than 9 months from contract award, and have participated in a number of successful operations. In addition, five MD 530F helicopters, already serving as primary training aircraft in Afghanistan, have been upgraded to the Cayuse Warrior configuration.

Lynn Tilton, Chief Executive Officer for MD Helicopters, said “The MD 530F has played an integral role in building the capabilities of the Afghan Air Force and the Afghan National Defense and Security Forces since the first aircraft arrived in Shindand in 2011.”

“In both training and combat configurations, the fleet has consistently maintained a mission launch rate of greater than 97%. This reliability – coupled with ease of operation, proven close air support and close air attack capabilities – stands as a testament to the legacy of this iconic airframe,” Tilton added.

According to MD Helicopters, the Afghan Air Force (AAF) fleet currently consists of 16 MD 530F Cayuse Warrior helicopters, with the mission equipment including:

The 12 new Cayuse Warrior Scout Attack helicopters will be delivered to meet the needs of the 2016 fighting season.

“We are extremely proud of the Cayuse Warrior’s performance during the 2015 fighting season,” Tilton concluded. “We are honored to have been selected, once again, to deliver this enhanced aerial fires capability to the U. S. Army and Afghan Air Force, and are forever-humbled in faithful service to the warfighter and their efforts to defeat the insurgency and ensure a democratic future for their country.”