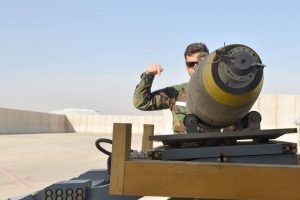 The Afghan Air Force (AAF) is expecting to get bomb building and weapons storage facilities in Mazar-e-Sharif, the provincial capital of northern Balkh province of Afghanistan.

The US Air Forces Central Command (AFCENT) said a loading area for aircraft is also in the plan with the construction work expected to kick off in December.

“We are here to tour the AAF munitions storage area site and see the construction area of the planned munitions area,” said Pack. “We also met with the Army Corps of Engineers to look at the blueprints to get an idea of the layout.”

“The new facilities will give the Afghans the ability to take the lead of maintaining and storing bombs and rockets,” said Maj. Michael Lopez, TAAC-Air detachment commander.

Building an area for assembling and storing weapons is the next step in the AAF being able to maintain their ability to take the fight to the enemy.

“Afghans here build the bombs and fly the planes during combat missions,” said Lopez. “Mazar-e-Sharif is the first forward operating location where the Afghan Air Force is managing the entire mission.”

The construction on the weapons area will include a bomb building facility, weapons storage facilities, and a loading area for aircraft is scheduled to be complete in July.