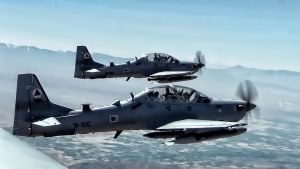 The Afghan Air Force has received 4 more light attack aircraft from coalition partners and were handed over to the 209th Corps of the Afghan National Army in northern Afghanistan.

The commander of the Afghan Air Force Abdul Wahab Wardak told reporters in Mazar-e-Sharif city that the planes will be used to suppress the militants in northern and northeastern provinces.

He said the planes, A-29 Super Tucanos, were handed over to the Afghan Air Force by the US forces and called it an important step to further reduce the gap in close-air support for the Afghan National Defense and Security Forces.

Gen. Wardak further added that the majority of the counter-terrorism operations are currently being implemented by the Afghan forces.

According to Gen. Wardak, the Afghan Air Force has now been equipped by up to 60 percent.

The A-29 is a multi-role, fixed-wing aircraft that will provide the Afghan air force with an indigenous air-to-ground capability and aerial reconnaissance capabilities to support the country’s counterinsurgency operations.

Eight Afghan Air Force pilots completed their training late last year and graduated from a program hosted by the 81st Fighter Squadron at Moody Air Force Base in United States and will return to Afghanistan for combat.