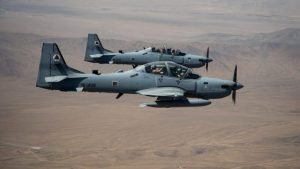 At least 6 Taliban insurgents were killed in a series of airstrikes in northern Kunduz province of Afghanistan, local officials said Saturday.

According to the local security officials, the airstrikes were carried out late on Friday night in the outskirts of Kunduz city and Chardara district.

The officials further added that 6 militants were killed in the airstrikes and at least 6 others were wounded.

The insurgents were targeted in Kanam area in the outskirts of Kunduz city and in the vicinity of Chardara district, the officials said, adding that an armored vehicle belonging to the Taliban insurgents was also destroyed with some weapons.

Kunduz is among the relatively volatile provinces in northern Afghanistan where the Taliban insurgents are actively operating in a number of its remote districts.

The group has launched some major attacks to retake the control of the strategic Kunduz city which they seized last year but the Afghan forces managed to repulse the Taliban offensives.