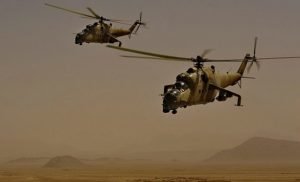 At least 5 militants were killed in an airstrike conducted by the Afghan Air Force in the central Ghor province of Afghanistan.

The Ministry of Defense (MoD) said Sunday that the airstrike was carried out in Pasaband district.

Pasaband is among the relatively volatile provinces in Ghor province where the anti-government armed militants occassionally conduct insurgency activities.

Recent reports suggested that several Afghan security personnel were trapped following a coordinated attack by the Taliban militants in this district.

However local officials said the siege was broken and at least two security posts overrun by the Taliban militants were recaptured by the Afghan forces.

Ghor provinces borders the restive Helmand province in the south which has been witnessing growing violence during the recent weeks.

Both the Taliban insurngents and the Afghan forces have suffered heavy casualties as a result of the ongoing violence in Helmand province during the recent days.