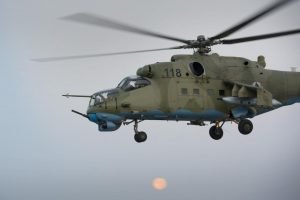 At least 37 Taliban insurgents were killed and nearly 30 others were wounded following a series of airstrikes conducted by the Afghan Air Force and coalition security forces.

A statement by MoD said the airstrikes were carried out on Saturday and Sunday in Mosa Qala district.

The statement further added that the group’s shadow district governor Mawlavi Taliban was killed along with his 9 men in the initial airstrike.

Two vehicle carrying militants was targeted in the second air raid which left at least three militants dead in Hazar Meshi area, the statement said, adding that the two vehicles were destroyed along with an anti-aircrat gun planted in the pick up vehicle.

A commander of the Taliban group identified as Ali-ul-Razaq was killed along iwth his 25 men in the third airstrike in Khataki village and 30 others were wounded, MoD said.

According to MoD, at least two soldiers of the 215 Maiwand Corps were martyred and three others were wounded during the operations.