Abdullah’s team says they will not accept preliminary vote results 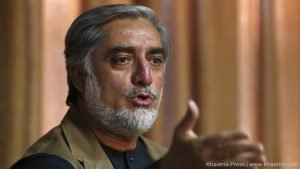 The electoral team of Dr. Abdullah Abdullah said Thursday that they will not accept the preliminary vote results for the runoff presidential election.

Baryalai Arsalaye, head of Dr. Abdullah’s electoral team, said the fraudulent and clean votes have not been separated during the vote counting and therefore their team will not accept the preliminary results which will be released on Monday.

He said the audit of votes in 1930 polling sites is not enough since the revaluation of votes in these polling stations will not impact the election process.

He insisted that all those ballot boxes which have ballot papers in favour of a single candidate should be audited.

Abdullah’s team claims that over 2 million fraudulent votes have been casted in favour of his rival during the runoff election and accused the electoral bodies for being involved in industrial scale fraud.

The preliminary votes results for the runoff presidential election was due to be announced on Wednesday; however, the election commission officials said the release was delayed until Monday to ensure transparency has been considered during the vote counting process.

IEC officials said the ballot papers from 1930 polling stations will be audited and will then release the preliminary vote results.