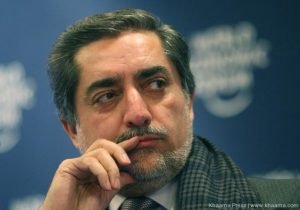 Dr. Abdullah Abdullah, presidential contender in the second round of election, on Monday called for the suspension of Independent Electoral Complaints (IEC) Chief, Ziaulhaq Amar Khel.

Speaking during a press conference late Sunday evening, Abdullah warned that he and his team will not accept the outcome of the runoff vote unless Amarkhil has been suspended.

Abdullah further added that he is concerned of systematic fraud in runoff presidential vote as Amarkhil was caught red handed.

He called for an investigation into allegations against Amarkhil and said the he and his team will not be convinced unless their representatives are present during the investigation.

Gen. Zahir accused Amarkhil for using the sensitive election materials in the favor of a specific candidate.

However, Amarkhil denied the allegations and called it a personal conspiracy by Kabul police chief against him.

Amarkhil also accused Gen. Zahir for misusing from his position and military uniform and said his interference resulted into the shortage of ballot papers in various polling stations.