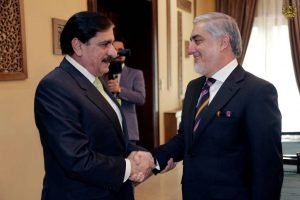 The Chief Executive of the Government of National Unity Abdullah Abdullah shared the issue of cross-border artillery shelling on eastern provinces of Afghanistan during his meeting with Pakistan’s National Security Advisor Nasser Khan Janjua.

A statement by the Office of the Chief Executive said the two sides also discussed other issues of bilateral interest including peace process and steps needed for improving bilateral relations.

Abdullah said peace and stability is one of the main demands and needs of Afghanistan and the Afghan government has provided better opportunities for reconciliation, insisting that all parties should take good advantage from the available opportunities.

He also added that the terrorist groups have their own specific agendas and the nations should work closely to eliminate the menace of terror.

According to Chief Executive Abdullah, new opportunities are also available for the betterment of relations between Afghanistan and Pakistan, emphasizing that the Pakistani government should take necessary steps to establish an environment of trust between the two nations.

In his turn, Mr. Janjua said his country supports the recent efforts of the Afghan government for peace process, adding that Islamabad is interested to establish join working groups for the betterment of relations and elimination of the barriers.

He called the recent efforts for peace and reconciliation as unprecedented and said the Taliban has no other pretext or excuses for the continuation of war and violence.

According to the Office of the Chief Executive, the two sides also discussed regarding the need for the issuance of a joint Fatwa by the Afghan and Pakistani Ulemas to denounce the ongoing violence in Afghanistan.