Abdullah says his team will not accept the election result 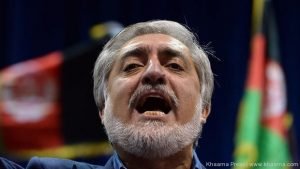 Afghanistan’s controversial presidential election was once again taken towards a deadlock after the Reform and Partnership term led by Dr. Abdullah Abdullah announced their stance regarding the election process.

The announcement by Dr. Abdullah comes as last round of talks between the two candidates over national unity government formation did not yield any result.

Abdullah said the political process has now entered to a deadlock and claimed that his team was the winner and will be the winner of the presidential election, accusing the electoral bodies for being involved in industrial scale fraud.

Abdullah criticized the vote audit and invalidation process and said the process had problems since the beginning and his team’s complaints and concerns were not considered by concerned parties involved in the process.

He claimed that his rival team had the support of government and the electoral bodies during the election and vote audit process.

US Special Representative for Afghanistan Thomas West says that...