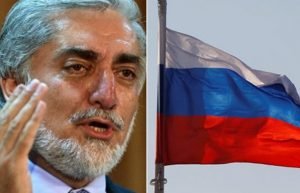 The Chief Executive of the Unity Government Abdullah Abdullah rejected the claims by Russia regarding the unidentified helicopters arming the Islamic State of Iraq and Syria (ISIS) militants.

Speaking during a meeting of the cabinet of ministers, Abdullah said such claims are baseless that unidentified helicopters are arming and supplying the ISIS militants in Afghanistan.

“We again draw attention to flights by ‘unidentified’ helicopter in northern Afghanistan to deliver arms and munitions to the local ISIS militants and the Taliban cooperation with this terrorist group. Superficially, Afghan media and local residents claim that these flights have been recorded in the Sar-e-Pol province,” the Ministry of Foreign Affairs of Russia said in a statement last week.

The statement further added “We note that this is happening in the direct vicinity of Central Asia states’ borders and many ISIS militants in Afghanistan hail from these countries. There is no reaction to these events either from Afghan security defense and law-enforcement agencies or the command of the US/NATO contingent deployed there.”

In the meantime, deputy presidential spokesman Shah Hussain Murtazwi in a statement said Sunday that the killing of ISIS Khurasan emir, Abu Syed Orakzai, demonstrates the Afghan government’s resolve in the fight against terrorism.

Informed sources in the National Directorate of Security said the ISIS Khurasan emir, identified as Saad Arhabi, was killed in Khogyani district on Saturday night.

The sources further added that Arhabi, also famous as Abu Syed Orakzai, was killed along with nine other ISIS group members who were accompaying him.