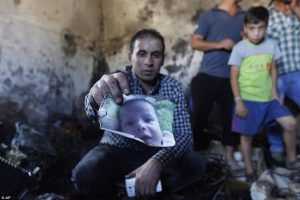 The Chief Executive Officer Dr. Abdullah Abdullah strongly condemned the brutal killing of a Palestinian in Kid by burning him to death.

The office of CEO issued a statement calling the brutal killing of the toddler by suspected Jewish extremists an act against the humanity.

Abdullah called on international community to strictly react against the brutal act and introduce the perpetrators to war crimes court so that justice is availed.

The statement also added that the government of Afghanistan continues to support the people of Palestine to ascertain their political future through establishment of an independent government.

The brutal killing of the toddler was also widely condemned by the international community with the Obama administration branding it a ‘vicious terrorist’ act the must be punished.

Israel’s Prime Minister Benjamin Netanyahu also called the firebombing “an act of terrorism in every respect” and made a rare telephone call to Palestinian president Mahmud Abbas.

The 18-month-old Ali Dawabsheh was burned to death following an arson attack by suspected Jewish extremists in the West Bank on Friday.

His body was carried through the streets of his West Bank village for his funeral.

The US Department of Defense has said that they will pay an unspecified amount of condolence...

US Defense Ministry said that they are releasing two prisoners from Guantanamo bay one of them is...

Islamic State of Iraq and Syria (ISIS) in its Telegram channel confirmed on Saturday, October 16...

Deputy Representative for UN Women in Afghanistan Alison Davidian in her recent article said that...