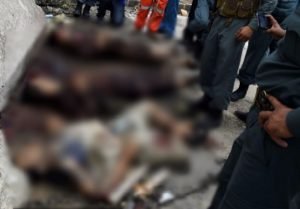 At least 9 Taliban militants were killed after stepping on an Improvised Explosive Device (IED) planted their fellow fighters in northeastern Badakhshan province.

According a security official, the incident took place late on Saturday night in Walik village of Arghistan district.

The official serving with the 209th Shaheen Corps of the Afghan National Army said a senior Taliban leader identified as the group’s shadow district governor was among those killed.

He said the senior Taliban leader was identified as Najib Khan and was appointed as shadow district governor for Arghistan by Taliban.

The official further added that 8 other militants were also wounded in the incident.

In the meantime, another provincial official said the militants were busy planting an Improvised Explosive Device (IED) when the incident took place.

The Taliban militants group has not commented regarding the incident so far which comes as the group frequently use Improvised Explosive Device (IED) as the weapon of their choice to target the security force.

The Improvised Explosive Device (IED) are also the major contributor of civilian casualties as the ordinary civilians are normally targeted in such attacks.