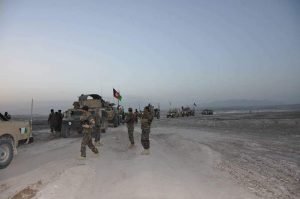 At least nine Taliban insurgents were killed during the operations of the Afghan National Defense and Security Forces in northern Baghlan province of Afghanistan.

The 209th Shaheen Corps of the Afghan Military in the north said the militants were killed during Alburz-24 operations.

The source further added that the operations were conducted in Turmosh valley in Tala Barfak district.

According to Shaheen Corps, one Taliban insurgent was also wounded and a check post established by the militants was destroyed.

The Taliban insurgents were using the check post to collect money from the vehicles carrying coal.

The security situation has started to deteriorate during the recent years as the anti-government armed militant groups are attempting to expand their insurgency in some key Northern and northeastern provinces.

However, the Afghan national defense and security forces are busy conducting terrorism operations to suppress the insurgency of the militant groups.