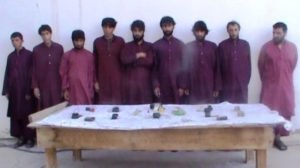 A group of 9 Haqqani network militants were arrested by the Afghan intelligence operatives before they manage to conduct attacks in Qalat city, the provincial capital of Zabul province.

NDS further added that the group was involved in a number of attacks in Qalat city that led to the killing of at least two people and wounding 5 others.

According to NDS, the group was looking to place the IEDs in the populated parts of Qalat city before they were arrested by the intelligence operatives.

This comes as a group of 3 Haqqani network militants were arrested before they manage to carry out attacks in Kabul city.

It is considered the most lethal insurgent group targeting the NATO-led coalition security forces and Afghan personnel in Afghanistan.