8,400 US troops to remain in Afghanistan through January 2017: Obama 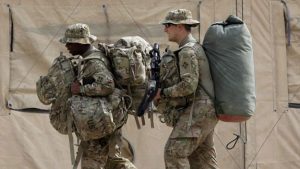 The US Department of Defense has announced that President Barack Obama has decided to keep 8,400 troops in Afghanistan through January 2017.

Obama said Wednesday that the decision to keep 8,400 troops in Afghanistan has been taken due to the situation in the country which remains ‘precarious’.

The president was joined for the announcement from the Roosevelt Room at the White House by Defense Secretary Ash Carter and Marine Corps Gen. Joe Dunford, the chairman of the Joint Chiefs of Staff.

“As president and commander-in-chief, I have made it clear that I will not allow Afghanistan to be used as safe haven for terrorists to attack our nation again,” Obama said. “I strongly believe that it is in our national interests, especially after all the blood and treasure we’ve invested in Afghanistan over the years, that we give our Afghan partners the very best opportunity to succeed.”

The Department of Defense said Obama made the decision after consulting with the new U.S. commander in Afghanistan, Army Gen. John Nicholson; his national security team; Congress and allies.

The decision means the United States will maintain a presence in both Kandahar and Jalalabad. The president’s announcement comes shortly before he departs for the NATO Summit in Warsaw, Poland, July 8-9, where leaders will discuss the situation in Afghanistan.

There has been undeniable progress in Afghanistan, the president said, but the country — one of the poorest in the world — needs more time to develop governmental, military and economic capabilities.

The first U.S. troops went into Afghanistan in October 2001, he said, and attacked al-Qaida. The terror group planned the 9/11 attacks against the United States behind a shield erected by the then-ruling Taliban. The aim was to stop Afghanistan from ever being able to be a safe haven for terrorists.

“We pushed al-Qaida out of its camps, helped the Afghan people topple the Taliban and helped them establish a democratic government,” Obama said. “We dealt crippling blows to the al-Qaida leadership, we delivered justice to Osama bin Laden and we trained Afghan forces to take responsibility for their own security.”