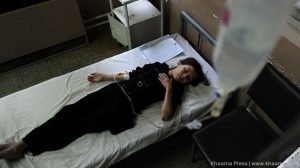 According to local authorities in northern Faryab province of Afghanistan, at least 80 school girls were poisoned in Sherin Tagab district on Tuesday.

He said the number of school girls later increased to 80 after inhaling the poisonous gas.

This comes as several girls were poisoned in north-eastern Takhar province of Afghanistan last month. However, education ministry officials denied militants involvement behind the poisoning of school girls and called it a psychological issue.

Education officials also warned to try those school girls who claims of being poisoned in the future.