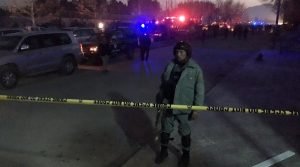 A group of eight terrorists of the Haqqani Network have been detained in connection to the deadly attack on Tolo TV workers in capital Kabul.

The Afghan Intelligence – National Directorate of Security (NDS) said the terrorists were arrested during a special operation from Hussain Khel village of Bagrami district in Kabul province.

A statement by NDS said the attack on Tolo TV workers on Wednesday was plotted and carried out by the Haqqani terrorist network.

This comes as the Taliban group claimed responsibility behind the attack on Tolo TV workers which left at least seven people dead.

The Taliban group had earlier issued a statement condemning the media agencies for covering incidents and war crimes committed during the fall of Kunduz city, which they claim were false.

Found in the late 1970s by Jalaluddin Haqqani, the terrorist network is accused of staging numerous cross-border attacks from their base in North Waziristan, including the 19-hour siege at the US Embassy in Kabul in September 2011.

The network is allied with al-Qaida and the Afghan Taliban and cooperates with other terrorist organizations in the region and was designated a Foreign Terrorist Organization on September 7, 2012 by the US Department of State.