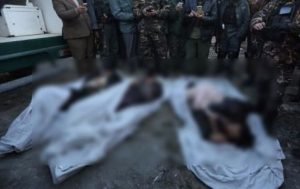 At least 9 would-be suicide bombers were killed after their suicide vests went off prematurely in northern Kunduz province of Afghanistan.

The Ministry of Interior (MoI) said all 8 would-be bombers were fully equipped with the suicide vests and were looking to carry out coordinated attack in Kunduz before their explosives went off.

A statement by MoI said the bombers were travelling in a group and were on their way from Dasht-e-Archi to Kunduz city when the incident took place earlier today.

MoI in its statement further added that the group belonged to Mullah Wali who is a commander of the Taliban group.

This is not the first time the anti-government armed militants have became victims of their own bombing.

Earlier, a group of 10 militants were blown up by their own explosives as they were busy making an Improvised Explosive Device (IED) in southeastern Ghazni province.

According to the security officials, the militants were busy making the IED inside a mosque in Andar district when their explosives went off prematurely, leaving all 10 militants dead.