7 Taliban militants killed during the ongoing operations in Bati Kot 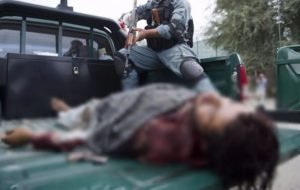 At least seven Taliban militants were killed during the operations in Bati Kot district of eastern Nangarhar province, the local officials said Monday.

The provincial government media office in a statement said the militants were killed during the operations in the past 24 hours.

The statement further added that the dead bodies of at least three militants were left in the area and some weapons and munitions were also captured.

In the meantime, another Taliban militant belonging to Qari Sajid group was arrested during a separate operation in Surkh Rod district.

According to the provincial government, the detained militant has been identified as Bashir Ahmad and two Pakistani sim cards, two mobile phones, a refugee card were also confiscated.

At least three more suspects identified as Ashraf, Anwar, and Samandar were arrested during a separate operation in Momand Dara district, the provincial government said, adding that the individuals were arrested on charges of having links with the Taliban group.