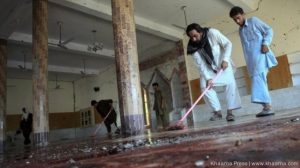 The interior ministry following a statement said the incident took place inside a mosque in Deh Yak district on Saturday.

The statement by interior ministry further added that the explosion left seven militants dead and there were no other casualties.

The anti-government militant groups including the Taliban militants frequently use improvised explosive device (IED) as the weapon of their choice to target Afghan and coalition security forces, however innocent civilians are mostly targeted in such attacks.

The United Nations in its latest report earlier last month also said that the improvised explosive device (IEDs) planted by anti-government armed militant groups, were the major contributor to civilian casualties in Afghanistan.

UN in its report said the anti-government armed militant groups were responsible for 34 percent of all civilian casualties which were caused due to improvised explosive device (IEDs).

Pashtuns in Afghanistan, Pakistan Have Been Victims of Terrorism: Malala Yousafzai

Amid Security Threats, Saudi Arabia Closes its Embassy in Kabul

This week, the UN warned all its member states...

According to a spokeswoman, Ali Shamkhani, the secretary of...

According to Zamir Kabulov, director of the Second Asian...