7 Afghan soldiers martyred in the past 24 hours, MoD says 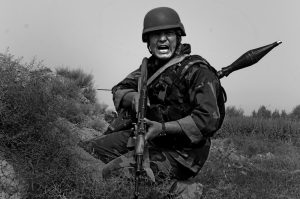 At least 7 soldiers of the Afghan National Army (ANA) forces were martyred during the counter-terrorism operations in the past 24 hours, the Ministry of Defense (MoD) said.

According to a statement by MoD, the ANA soldiers lost their lives during the countrywide operations that led to the elimination of at least 53 militants

“The Afghan National Army (ANA) forces are prepared for all kinds of devotion and with all force to maintain security and comfort for the people of Afghanistan,” a statement by MoD said, adding that 7 Afghan soldiers were martyred during counter-terrorism operations against the internal and foreign terrorists.

Helmand, and 6 others including 2 ISIS loyalists were killed in Nangarhar province.

“At least 8 terrorists were killed in the vicinity of Posht-e-Rod district of Farah province, 7 were wounded, 3 Hatchback vehicles were destroyed along with 3 motorcycles,” MoD added.

MoD also added that 3 militants were killed during separate operations conducted in Ghazni and Jawzjan provinces and at least 7 others were wounded.

This comes as the Taliban-led insurgency has been rampant since the group announced its spring offensive in mid-April this year but the Afghan forces launched a counter annual attack under the name of “Shafaq” to repulse and eliminate the enemy threats.