7 Afghan army soldiers martyred in the past 48 hours 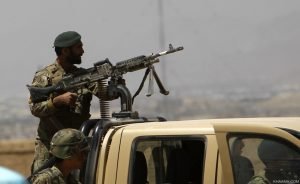 The Ministry of Defense (MoD) said the Afghan army soldiers were martyred in the past 48 hours.

A statement by the Ministry of Defense (MoD) said the Afghan soldiers were martyred due to Improvised Explosive Device (IED) explosion and direct fire by militants, using heavy weapons.

The Taliban-led insurgency have been rampant since the group launched it’s summer offensive earlier this year.