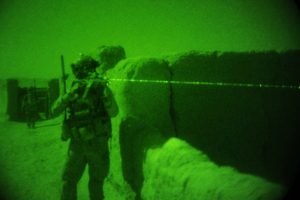 At least 6 militants were killed during a night raid conducted by the Afghan commandos in northern Kunduz province of Afghanistan.

The Ministry of Defense (MoD) said at least 60 suspected militants were also arrested during the operation.

A statement by MoD said the militants were killed as the Afghan commandos were conducting the night raid and came under fire from the militants.

The statement further added that the two key group leaders of the militants identified as Qari Zabiullah and Qari Najibullah were among those killed.

The anti-government armed militant groups including the Taliban group have not commented regarding the report so far.

Kunduz is among the volatile provinces in northern Afghanistan where anti-government armed militant groups are actively operating and frequently carry out insurgency activities.

Qari Salim was a key leader of the Taliban group who played a vital role in the collapse of Kunduz city last year.

The Afghan forces have stepped up counterterrorism operations in Kunduz province as the Taliban group launched a major offensive to take control of key areas of the province, including the strategic Kunduz city.