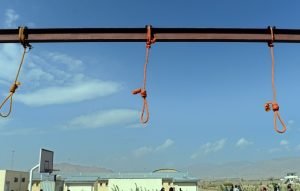 At least six militants have been hanged in Pul-e-Charkhi prison of Kabul days days after Kabul government vowed punishment for militants convicted of terror charges.

The execution of militants follows over a week after President Ghani received a militants sentenced to death.

The list was asked by President Ghani following a deadly attack on VIP protection unit in capital Kabul last month which left at least 64 dead and 347 others wounded.

The Taliban group claimed responsibility behind the attack but the officials said they doubt the Pakistan-based Haqqani terrorist network plotted and carried out the attack.

The attack sparked furor among the Afghan officials and citizens of country who called on the government to ensure justice is served by implementing the judiciary institutions’ verdicts against the terrorists, specifically Anas Haqqani who is kept in the custody of the Afghan forces.

“By hastily seeking retribution for the horrific bombings that killed over 64 people in Kabul last month, the government of Afghanistan’s plans to execute those convicted of terror offences will neither bring the victims the justice they deserve, nor Afghanistan the security it needs,” said Jameen Kaur, Amnesty International’s Deputy Director for South Asia.