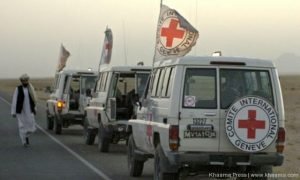 At least six employees of the International Committee of the Red Cross (ICRC) were shot dead in northern Afghanistan.

According to the preliminary reports, the ICRC employees were shot dead by the loyalists of the Islamic State of Iraq and Syria (ISIS) terrorist group.

A local government official in Jawzjan confirmed that  the ICRC workers were executed in Qoshtapa district.

The official speaking on the condition of anonymity further added that two other ICRC workers were abducted and there are no reports regarding their fate.

“Six staff members of the International Committee of the Red Cross (ICRC) have been shot and killed in Afghanistan. Two staff members are unaccounted for,” a statement by ICRC said.

The statement further added that the team, composed of three drivers and five field officers, was on its way to deliver much-needed livestock materials in an area south of the town of Shibergan in Jawzan province and their convoy was attacked by unknown armed men.

“This is a despicable act. Nothing can justify the murder of our colleagues and dear friends,” said the head of the ICRC delegation in Afghanistan, Monica Zanarelli.  “At this point, it’s premature for us to determine the impact of this appalling incident on our operations in Afghanistan. We want to collect ourselves as a team and support each other in processing this incomprehensible act and finding our two unaccounted for colleagues,” said Mrs Zanarelli,

“We condemn in the strongest possible terms what appears to be a deliberate attack on our staff. This is a huge tragedy. We’re in shock,” said the president of the ICRC, Peter Maurer.

“These staff members were simply doing their duty, selflessly trying to help and support the local community. Our thoughts are with the families and loved ones of our colleagues killed and those unaccounted for,” said Mr Maurer.