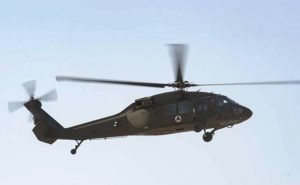 According to the Afghan officials and the NATO-led Resolute Support Mission in Afghanistan, the pilots graduated on Monday after completing a training course of 3 months.

The commander of the Afghan Air Forces in the South General Abdul Raziq Shirzai said the six Afghan pilots were trained for the new helicopters in Kandahar military airport.

The NATO-led Resolute Support Mission in an online statement said “The first Afghan Blackhawk helicopter pilots graduated Nov. 20 in Kandahar. The UH-60A Blackhawk helicopters, and now the new Afghan pilots, bring increased capability to the Afghan Air Force. This graduation is a landmark event in the AAF’s modernization effort, and is a part of the NATO train, advise, and assist mission in Afghanistan.”

The Afghan Air Force is expected to receive 159 UH-60 Black Hawk helicopters including 58 armed version of the choppers as part of the $1 billion deal to provide 159 helicopters to the Afghan forces until 2024.

This comes as the Afghan government with the support of its international allies and NATO has stepped up efforts to boost the capabilities of Afghan national defense and security forces, particularly the Afghan Air Force.