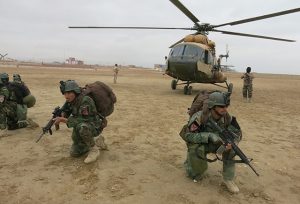 Brigadier General Dawlat Waziris Deputy Spokesman for the Defense Ministry of Afghanistan told Khaama Press on Saturday that 55 armed opponents of the government have been killed in Operation Zulfiqar in Helmand province.

He says 57 other insurgents were also wounded and five arrested during the operation in Sangin, Marja, Nawa and Washir District in past 48 hours.

42 bombs were also defused by the Afghan National Security Forces in past 48 hours, according to the Deputy Spokesman of the Defense Ministry.

Operation Zulfiqar which is jointly ran by hundreds of Afghan National Security Forces started about a week ago in different parts of Helmand province to clear the target areas from the presence of the insurgents.

Operation Zulfiqar is reportedly the largest operation Afghan National Security Forces are conducting independently after receiving full responsibility of the security from NATO forces this year.

On January 1, Afghanistan with some 350, 000 troops received full responsibility of security after NATO forces ended its combat role in Afghanistan on 31 December 2014.