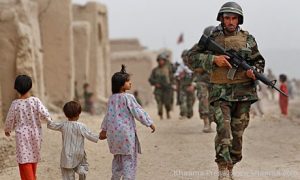 According to United Nations Assistance Mission in Afghanistan (UNAMA) around 1,694 child casualties were documented in Afghan conflict in 2013.

UNAMA following a statement said Monday at least 545 children were killed and a furher 1,149 others were injured last year.

According to UNAMA, the leading cause of death and injury of children was improvised explosive devices, which do not distinguish between combatants and civilians and are the biggest killer of civilians in Afghanistan.

In the meantime, the Independent Human Rights Commission of Afghanistan (IHRC) Chief, Seema Samar said around 284 children have been killed as a result of surge in violence across the country this year.

Samar said the wave of violence in Afghanistan has dramtically increased this year and blamed the anti-government armed militant groups for majority of the civilian deaths which are occuring due to use of improvised explosive devices (IEDs).

She also criticized the anti-government armed militant groups for misuse of children specifically in armed conflicts and called on all parties involved in Afghanistan’s conflict to respect the human rights and avoid misuse of children.

The UN special envoy for Afghanistan Jan Kubis also criticized the misuse of children and said the insurgent groups in Afghanistan are using the children for suicide attacks after washing their brains.

“The conflict has exposed children to armed groups that prey on their vulnerability and exploit them, and who use children to participate in active hostilities or as messengers and delivery boys – further exposing children to the dangers of war,” Kubis said.

This comes as the Afghan intelligence – National Directorate of Security (NDS) accused religious schools (Madrasas) in Pakistan for encouraging Afghan children to carry out suicide attack.

NDS spokesman, Lotfullah Mashal said around 80 percent of the suicide attacks are carried out by children in Afghanistan.