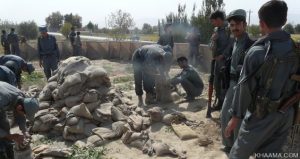 Meher Dil, district police chief for Marja says 5 police were martyred and an insurgent was killed after unknown number of rebels attacked a police checkpoint in Trikh Nawar area of the district last night (06 DEC 2014).

Several insurgents were also wounded in the exchange of fire with police following the attack, Meher Dil added