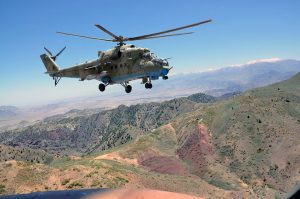 At least five militants were killed in an airstrike carried out by the Afghan Air Force in southern Uruzgan province.

The Ministry of Defense (MoD) said the airstrike was carried out in the village of Sang Andaz in Charchino district targeting the hideout of the terrorists.

Uruzgan is among the relatively volatile provinces in southern Afghanistan where anti-government armed militant groups are actively operating in a number of its districts and often carry out insurgency activities.

At least 9 Taliban militants including the group’s two top leaders were killed during separate clashes with the Afghan security forces in this province late last month.

The 205th Atal Corps of the Afghan National Army said the group’s shadow governor Mawlavi Jan Agha and military commission chief Asadullah were among those killed.

In the meantime, the Taliban militants carried out a deadly attack on the Afghan army posts in Dehrawood district, leaving at least 10 soldiers martyred and 12 others missing.