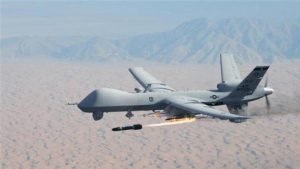 At least five loyalists of the Islamic State of Iraq and Syria (ISIS) terrorist group were killed and five others were wounded in two separate drone strikes in eastern Nangarhar province of Afghanistan.

The provincial police commandment in a statement said the two airstrikes were conducted by the foreign forces on Wednesday morning.

The statement further added that the first group of the militants were targeted in Haska Mina district, leaving at least 4 militants dead and three others wounded.

The airstrike was carried out around 9 am local time in Gorgori area of Haska Mina, the statement said, adding that the second group was targeted around 11:00 am in Achin district.

According to the police commandment, the senior leader of ISIS loyalists Shahid Omar was killed and two others were wounded.

The anti-government armed militant groups including the ISIS loyalists have not commented regarding the reports so far.