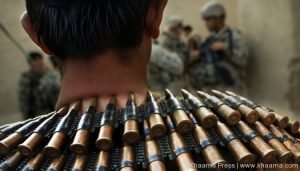 According to local authorities in eastern Kunar province of Afghanistan, at least nine people including five children and four women were killed following a joint military operation by Afghan and coalition security forces in Shaigal district.

Provincial governor Syed Fazlullah Wahidi said the operation was conducted around 1 am local time on Tuesday night at Chopan village.

This comes as human rights organizations have expressed concerns regarding civilians casualties speficially women and children deaths during military operations in Afghanistan.

Rights advocates warned that civilians casualties during the militar operations in Afghanistan have increased as compared to previous years.

In the meantime provincial governor Syed Fazlullah Wahidi said the incident took place after Afghan and NATO troops attacked a house used by Taliban militants as a shelter.

He said a senior Taliban commander was also killed during the operation while local residents said that the security forces have arrested at least six militants.

He said at least five police officers wre killed and three others were injured during the clashes.