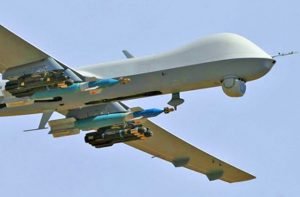 At least 49 militants affiliated with the Islamic State of Iraq and Syria (ISIS) terrorist group were killed in separate drone strikes in eastern Nangahar province.

According to the local government officials, the militants were killed in Achin district on Monday.

He said at least 37 others who were apparently ISIS affiliates were killed in the second drone strike in the same area around 2:00 pm local time.

The airstrikes were carried out as the militants had gathered for a meeting in Achin district, the local residents said, adding that several dead bodies were left in the area following the raids.

This comes as sporadic clashes were reported between the militant groups in parts of Achin and Nazian districts on Monday.

According to the local government officials, at least fourteen militants were killed and two others were injured during the clashes.

Clashes have intensified between the Taliban militants and ISIS affiliates in eastern Nangarhar province during the recent weeks as the newly emerged ISIS militants are trying to gain a foothold in Afghanistan.

In the meantime, the Hezb-e-Islami party led by Gulbuddin Hekmatyar announced support to the ISIS affiliates to combat the Taliban militants.