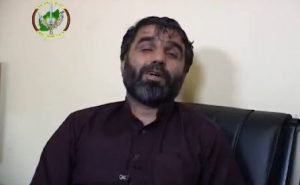 National Directorate of Security (NDS) says that Rais Khudaidad was hanged to death for his crimes in Kabul’s Pul-i-Charkhi prison around 11:30 AM today.

He was arrested about five months before by the National Directorate of Security (NDS) in Kabul.

NDS had called him the most cruel and dangerous person in the history of Afghanistan.

Rais Khudaidad had hand in several incidents of kidnapping, killings and armed robbery.

The grand bond of mafia he was leading was also operating in foriegn countries.

NDS had earlier reported that Rais Khudaidad had carried out criminal activities different parts of the country, including Kabul, Kundoz and Kandahar.

NDS states that Rais Khudaidad was on the black list of Tajikistan and The International Criminal Police Organization (INTERPOL).

This is the 1st criminal who received death sentence from the National Government of Afghanistan (NUG) after it came into existence over five months before.

Five other persons were also hanged in the era of this government but those death sentences were signed by the Ex-President of Afghanistan, Hamid Karzai.