40 ISIS militants killed, 22 wounded in airstrikes in East of Afghanistan 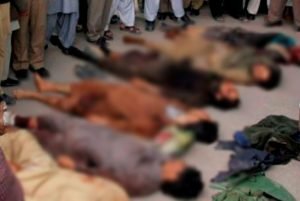 At least 40 loyalists of Islamic of Iraq and Syria (ISIS) terrorist group were killed in airstrikes in eastern Nangarhar province of Afghanistan.

The airstrikes were conducted in Kot district as the loyalists of the terror group launched a major attack on police check posts early on Friday.

According to the officials, at least 22 loyalists were also wounded in the airstrikes.

The ISIS terrorist group has not commented regarding the report so far.

Local officials in Nangarhar earlier said at least 30 militants of the terror group were killed during the clashes in Kot district yesterday.

At least 3 civilians were also killed and at least 15 others were wounded during the clashes which continued until later Friday.

The loyalists of ISIS terrorist group are actively operating in a number of the districts of Nangarhar province, mainly in Kot and Achin districts which have been the hotbed for ISIS militants.

The group continues to pose threats and often conduct insurgency activities despite they received major blows as a result of the Afghan and US forces raids.