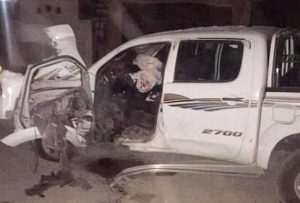 At least four people were wounded in a magnetic bomb explosion in Kabul city late Sunday, the security officials said.

The incident took place in the vicinity of 10th police district of the city in Sherpur area.

Stanikzai further added that four people were slightly wounded in the explosion.

The anti-government armed militants are attepting to carry out similar attacks in Kabul city and other key provinces and cities of the country during the recent months.

This comes as at least two Air Force personnel lost their lives in an attack by unknown gunmen in Kabul city last week.

The militant groups have carried out several similar attacks against the security officials and personnel in the city during the recent months.