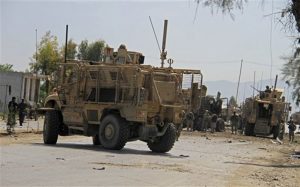 At least four US soldiers sustained injuries in a suicide car bomb attack in southern Kandahar province of Afghanistan.

The incident took place on Monday afternoon in the vicinity of Dand district of Kandahar province after a suicide bomber detonated a vehicle packed with explosives near the convoy of the foreign forces.

“Four U.S. soldiers were wounded in Kandahar province, Afghanistan, from a vehicle-borne improvised explosive device, according to Army Lt. Col. Koné Faulkner, a spokesman for the Resolute Support mission.

“We can confirm reports that a vehicle-born improvised explosive device detonated in Kandahar province at approximately 2 p.m. today,” Faulkner told Military Times. “There were a total of four U.S. service members injured and all are in stable condition in U.S. medical treatment facilities.

He said there were no coalition fatalities as a result of the attack, he added

The Taliban militants group in Afghanistan has claimed responsibility behind the attack.

This comes as the security situation in Kandahar had proven during the recent months although the anti-government armed militant groups are attempting to destabilize the key southern provinces.

According to the security officials, the anti-government armed militant groups are attempting to carry out suicide bombings and indirect attacks as their insurgency was suppressed during the offensive counter-terrorism operations in the summer time.