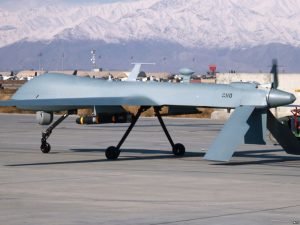 At least 4 Taliban insurgents were killed in the latest drone strike carried out by the US forces in northern Kunduz province of Afghanistan.

According to the local security officials, the airstrike was carried out late on Monday night in Chardara district.

A commander of the 209th Shaheen Corps of the Afghan National Army Gen. Abdul Qahar Aram confirmed that 4 Taliban insurgents were killed in the air raid.

Gen. Aram further added that the airstrike did not incur any casualties to the local residents.

This comes as a number of the Taliban insurgents were killed in a similar raid in Chardara district late on Saturday night.

There are conflicting reports that a number of the civilians in custody of the Taliban militants were also killed in the airstrike.

The latest airstrikes targeting the Taliban insurgents in Kunduz province comes as the US President Barack Obama earlier approved a wider role for the US forces to target the resurgent Taliban militants.

Kunduz is among the volatile provinces in northern Afghanistan where the Taliban militants are actively operating and have intensified insurgency activities during the recent months.