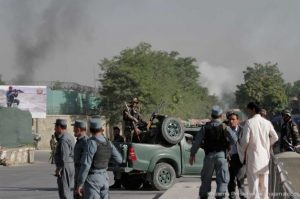 Afghan interior ministry officials said the attack was carried out near the eastern entrance gate of the presidential palace around 6:30 am local time.

The officials further added that the militants were equipped with heavy and light military equipments.

In the meantime reports suggest that the suicide bombers also attacked Ariana Hotel located in the area and is the station of US Central Intelligence Agency (CIA).

A spokesman for the Taliban group Zabiullah Mujahid said heavy casualties were incurred to Afghan national security forces, however the officials have denied the Taliban claims.

The attack by Taliban militants comes amid peace efforts by the international community to end the decade-old war in the country.

A large number of the Afghan journalists were also present during the time of attack, who are due to attend a press conference by Afghan president Hamid Karzai.

No civilian casualties have been reported so far.